Here’s everything you need to know about the English Cucumber, like what are English Cucumbers? Are they the same as a hothouse cucumber? What’s the difference between English cucumbers vs Persian cucumbers? Why are they wrapped in plastic? Plus 15 Recipes with Cucumbers to help you incorporate more cucumbers into your diet. 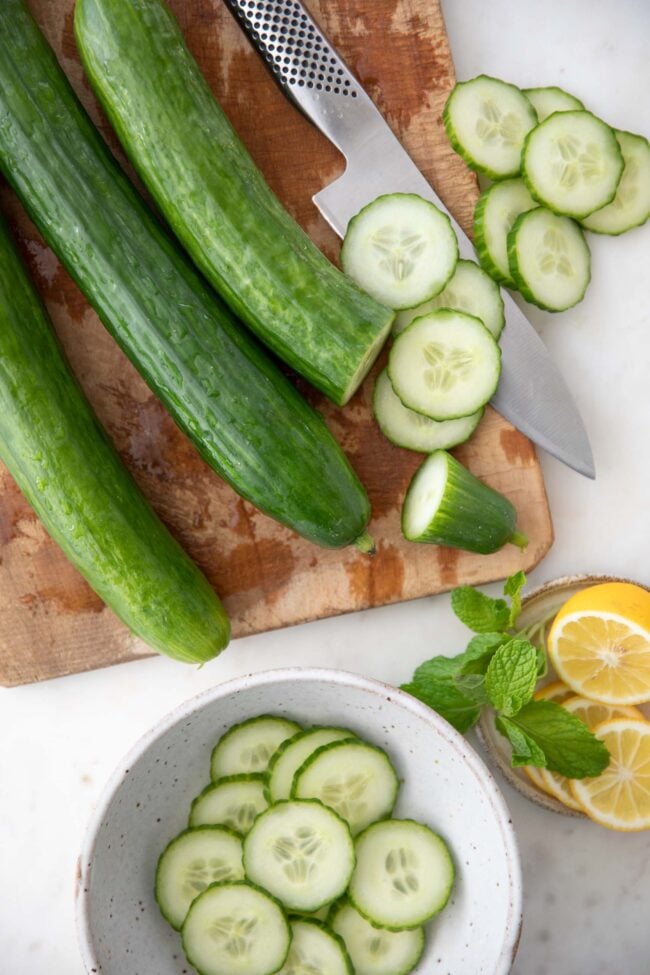 There’s several different types of cucumbers and there’s many ways to use them. I’ve listed 15 cucumber recipes in this article to help you incorporate more cucumbers into your diet. 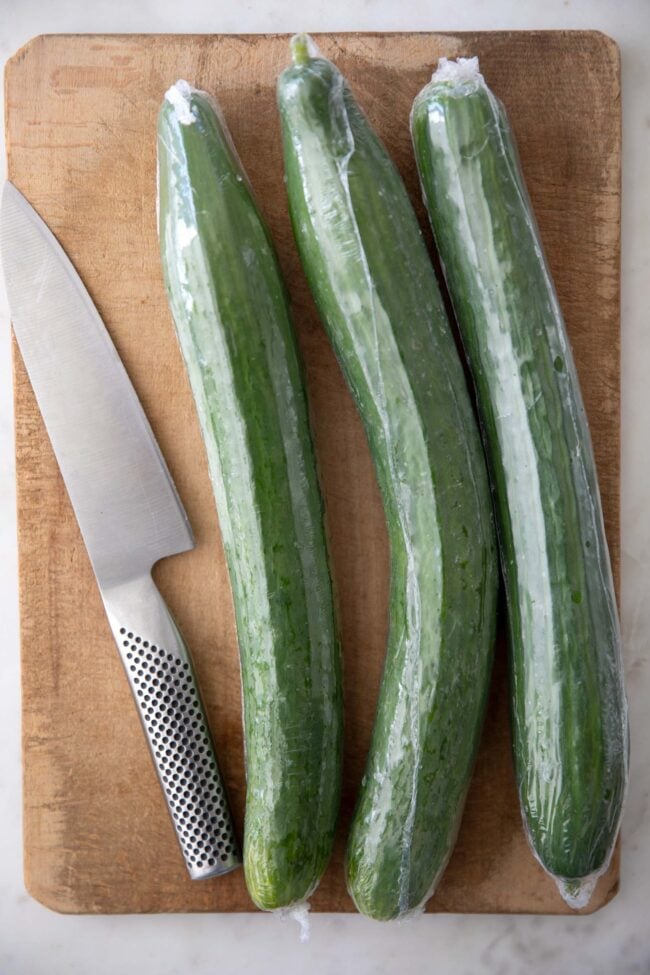 What Are English Cucumbers

English cucumbers are also called hothouse, greenhouse, seedless, burpless and European cucumbers. They are long with dark green skins that have distinct ridges running lengthwise. They have tiny seeds so the  flesh (and skin) don’t taste bitter like the garden cucumber does. Cucumbers are a member of the cucurbitaceae family (gourd family), which includes zucchini, squash, melons and pumpkins. Botanically speaking, cucurbits are actually a type of fruit. Most cucurbits are herbaceous tendril-bearing vines that are commonly grown in warmer climates.

Why Are They Wrapped in Plastic

Many cucumbers found in supermarkets are usually waxed to prevent them from drying out on their long trip from the field to market. Rather than waxing, English hothouse cucumbers are typically wrapped in plastic, unless you purchase them at a farmer’s market where they likely won’t be wrapped or waxed.

There are several different types of cucumbers, but when choosing the best to buy, no matter what type, always look for firm cucumbers that are free of soft spots, cracks or withered and shriveled ends. The skin should be a rich green rather than a pale green.

How to Store Them

Cucumber should be stored unwashed in a plastic bag and kept in the refrigerator where they should last for up to a week. 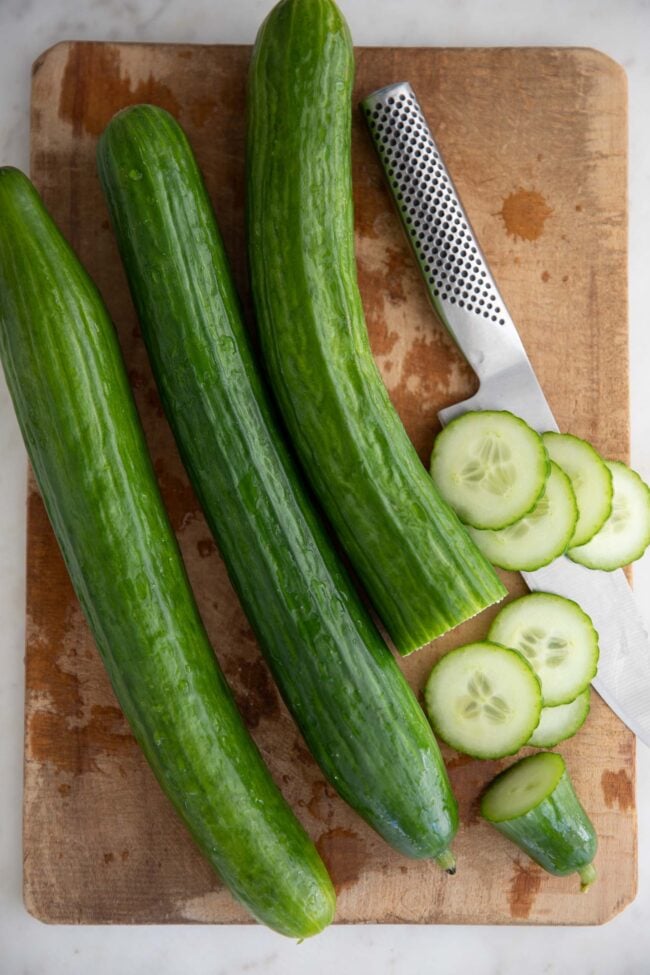 There are many varieties of cucumbers. Cucumbers that you eat fresh are typically classified as slicing cucumbers and other cucumbers with their thick and bumpy skins are most often used for pickling. English cucumbers are usually a little more expensive than garden cucumbers, but with English cucumbers you can consume the peel and tiny seeds and enjoy all the fiber and nutrients they provide.

The typical cucumbers found in the grocery stores are American cucumbers (also called slicing cucumber and garden cucumber). They have a thicker and darker green skin, with a softer texture and many large seeds that can give the flesh a slightly bitter taste. It’s best to peel them and scrape away the seeds before consuming.

Persian cucumbers are similar to English hothouse cucumbers in taste and texture, but they’re about half the size. They’re both crunchy, have thin skins, few seeds and mild flavor. Neither of them need to be peeled before consuming.

Kirby cucumbers are shorter, with a thick bumpy skin. Like the English cucumber, they’re also crispy and mild in flavor. These cucumbers are most often used for pickling.

Like the English cucumber, Japanese cucumbers are long, crispy, have thin skins and few seeds. They are slightly sweet and have more flavor than other types of cucumbers. 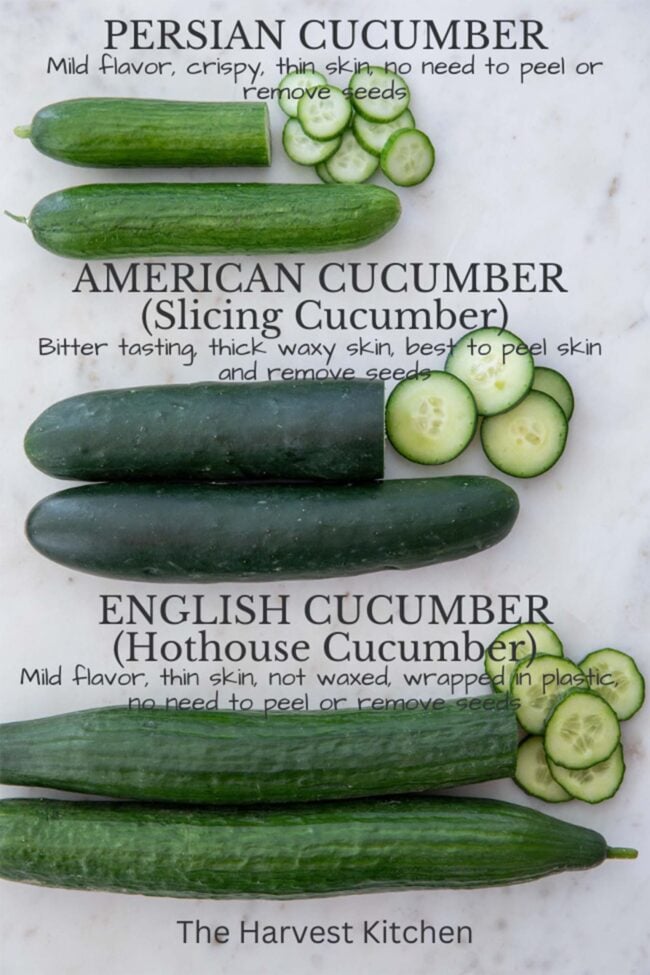 Cucumbers are low in calories and high in fiber. They are made up of about 95% water. Some studies suggest that an increase in water consumption may help with weight loss due to the breakdown of body fat and the feeling of satiation so we will be likely to consume less food.  It’s best to consume the cucumber skin which is rich with fiber and vitamin K. 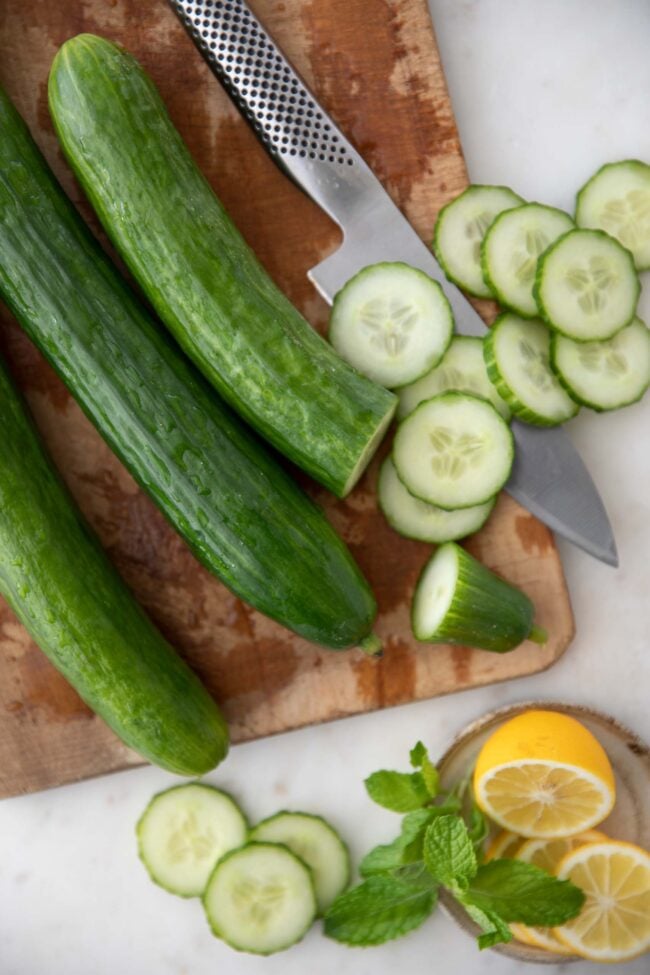 Here are some recipes with cucumbers to help you incorporate more nutritious and hydrating cucumber into your daily wellness plan.