Home » Cooking Basics » How Many Tablespoons in a Cup

How Many Tablespoons in a Cup

Knowing how to accurately measure ingredients is crucial to the success of your recipe. In this article, we’ll answer a few common questions like How Many Tablespoons are in a Cup, and how to convert tablespoons to ounces (tbsp to oz) for making successful recipes in the kitchen. 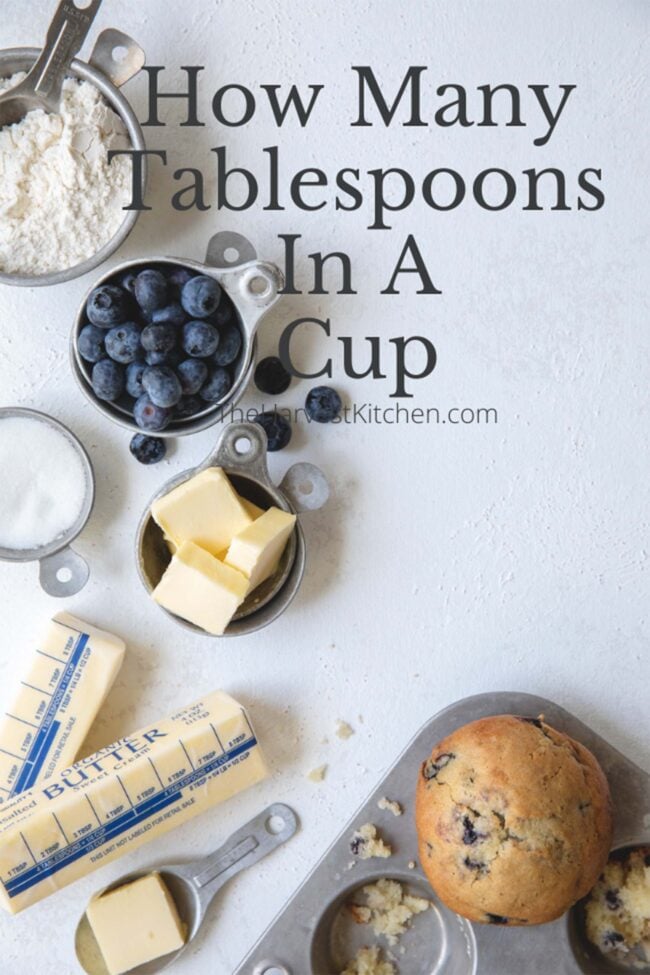 Being successful in the kitchen, especially when baking, requires the accurate measurement of ingredients. When following recipes to make a meal, you might be able to eyeball the amount of herbs and spices and other ingredients when making a dish, but baking is a different story. It’s important in baking to be more concise with measurements. If you add too much flour or too little, the outcome of your recipe might not be what you had hoped for.

What is a Tablespoon

A tablespoon is a US volume unit and is a common measurement of dry ingredients used in cooking and baking. Tablespoon is commonly abbreviated in recipes as  “tbsp” or “tbs”. You can use a measuring spoon to measure ingredients such as baking powder or soda, salt, dried herbs and spices. A measuring spoon can also be used to measure liquids such as vanilla extract, mustard, mayonnaise, honey and maple syrup.  1 US tablespoon = 1/16 cup (which is 0.5 fluid ounces and 15 milliliters).

Technically a tablespoon is neither a Imperial or Metric measurement

What is a Measuring Cup

There are two different types of measuring cups – liquid and dry. Liquid measures volume and US fluid ounces and dry measures weight. The differences of the two are minor, but it matters which one you use.

Dry Measuring Cups – These are used to measure dry ingredients like flour, chocolate chips, nuts, beans, rice and oats. One dry measuring cup equals the same amount as one liquid measuring cup. When using a dry measuring cup, it’s customary to fill it to the brim (with say flour or sugar) then level off the top by using the back of a knife. For instance, when measuring flour, you would lightly spoon the four into a dry measuring cup and fill it to the brim, then level the top evenly by taking the back of a knife (or some other flat edge) and scraping off the excess flour from the top. There are different methods for filling a dry measuring cup, such as scooping sifting and spooning.  A properly measured dry cup of flour, sugar or oats should have a flat surface that is even with the brim.

When measuring foods that aren’t dry nor are they purely liquid, such as mayonnaise, yogurt, or sour cream, you could still use the dry ingredient measuring cup and level the top evenly with the top by using  the back of a knife or another strait edge. If your recipe calls for your ingredients in measurements in ounces or pounds, such as flour, chocolate chips or nuts, you would need to use a kitchen scale to measure the exact weight of the ingredient. As an example, one cup of flour weighs more than one cup of nuts or chocolate chips.

How to Measure Butter

So what about butter? Butter is technically a solid, and the wrappers they come in are typically marked by lines for tablespoons. You’ll usually find that there are 8 tablespoons in each stick of butter.

This method applies to vegan butter as well.  Just check the wrapper for the tablespoon markings. If you are using solid coconut oil, you can spoon the amount you need into a dry measuring cup and level it off using the back of a knife. to scrape away any excess. 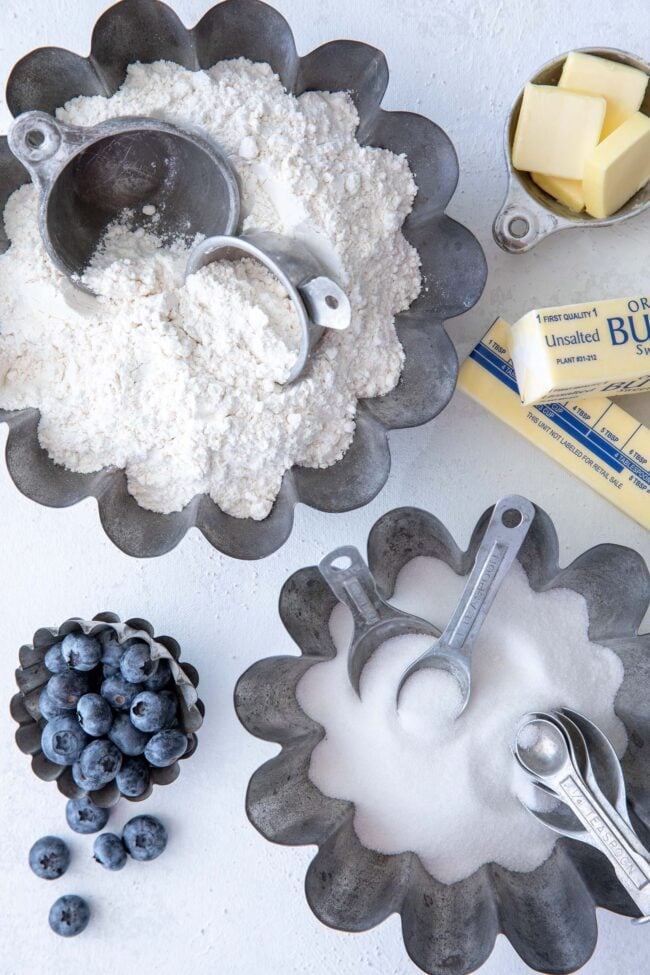 How Many Tablespoons in 1 Cup

There are 16 tablespoons in 1 cup

How Many Tablespoons in 3/4 Cup

How Many Tablespoons in 1/2 Cup

There are 8 tablespoons in 1/2 cup

How Many Tablespoons in 1/4 Cup

There are 4 tablespoons in 1/4 cup

If you’ve memorized these simple measurements, then you could easily use your measuring spoons rather than cups for simple recipes.

If you need to convert US tablespoons to fluid ounces (tbsp to oz), just multiply the number of tablespoons by 0.5, with 0.5 being the conversion factor [tablespoon x 0.5].

You can use a calculator or save the conversion table below so you have it on hand the next time you need to know these basic tbsp to oz conversions.

How many ounces in 2 tablespoons?

There is 1 ounce in 2 tablespoons

How many ounces in 4 tablespoons?

There are 2 ounces in 4 tablespoons

How many ounces in 8 tablespoons?

There are 4 ounces in 8 tablespoons

How many ounces in 12 tablespoons?

There are 6 ounces in 12 tablespoons

How many ounces in 16 tablespoons?

There are 8 ounces in 16 tablespoons

This table converts tablespoons to dry measurement to liquid measurement 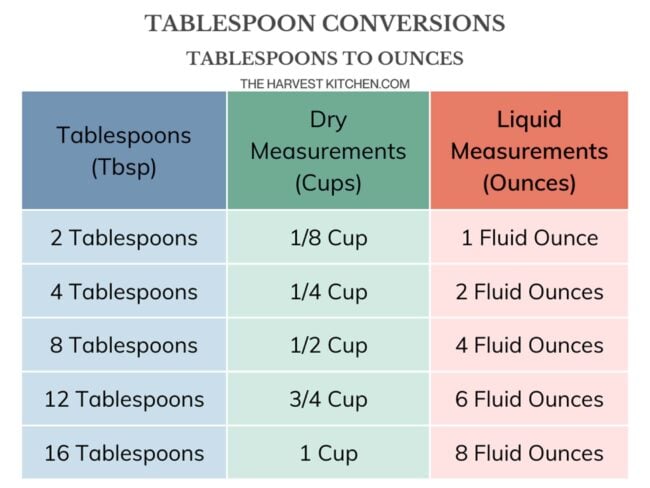 And if you need to convert ounces to tablespoons, just divide the number of fluid ounces by 0.5, with 0.5 being the conversion factor [fl oz ÷ 0.5]

The US Customary System

The US Legal Cup

This is another definition of a cup used in the United States. It’s called the US legal cup which is used mainly for nutrition labeling by the FDA based on United States laws and it is customarily used for cooking measurements.

Imperial (US) System vs Metric System

The United States uses the Imperial System for measurements, where most countries like the United Kingdom, Australia, Canada have adopted the metric system using measurements like grams, meters, liters, kilograms and kilometers. There aren’t significant differences in volume between the Imperial (US) and Metric measuring systems. You can easily use US teaspoons and tablespoons for metric measurements if a recipe is written using the Metric system.

Note: These measurements are from the  The Calculator Site

Cooking and baking can be very rewarding when the recipes turns out! Having simple measurements memorized (like knowing there are 16 tablespoons in a cup) will be helpful for you to achieve great success in the kitchen.